On SPACE and BBC AMERICA’s Orphan Black, Emmy-award winning actress Tatiana Maslany is a cast unto herself. Embodying a seeming swarm of “Project Leda” clones – at least eight of which are still alive! – she’s won us over with her diverse and intense portrayals as a street-smart outsider (protagonist Sarah Manning), a biology PhD student (Cosima Niehaus), a feral Anglo-Ukranian convent escapee (Helena), and a soccer mom with a secret (Alison Hendrix). Uncertain of their true origins, the clones are nonetheless linked in their struggle to overcome the corrupt forces that threaten their lives. They also all happen to harbor incredibly distinctive, darkly poetic styles – thanks in no small part to the painterly hand and imagination of master makeup artist Stephen Lynch. This is makeup at its most psychological, and TV is all the better for it.

In Orphan Black’s fifth and final season, premiering June 10 on SPACE and BBC America, secrets – and plenty of blood – will spill. Along with Jordan Gavaris (Sarah Manning’s belovedly flamboyant foster brother, Felix Dawkins), Maslany and Lynch unite in an exclusive conversation with M·A·C about the secrets, experiments and motives behind the show’s haunting and harrowing looks.

Orphan Black is such a gritty world. What’s the role of beauty in that?

Stephen: That’s the challenge, isn’t it? Finding beauty anywhere. It’s like looking at the desert and only seeing dry, cakey land. You have to open your mind and find the beauty. I wish we could do a Vanity Fair-style editorial. Helena, with no changes, would make a beautiful portrait. I picture her in a bed of roses, or a hundred camellias, with colours pulled from her eye makeup. Sarah’s look is smeared, crumbly and hard, but also beautiful in its brittleness.

Jordan: With Sarah and Felix, their makeup is a little broken down, a little shitty. It’s where they grew up – the hard streets of South London. It’s Estuary, working class families. They’re punks. There’s something about that scene that’s been a bit hetero – it’s the masculine of masculine. But what I love about Felix is that he’s so feminine and so lithe; he dances through life. It’s interesting to couple that with this very decayed, lived-in look.

Sarah Manning is who you see in subways, on billboard campaigns. What makes her the definitive public face of the show?

Stephen: Hers is an iconic look – defiant and proud. It’s a bit Patti Smith, a bit Louise Brooks and a bit Amy Winehouse. It’s all the girls who took a strong stand and put their face forward. You have to own that look. It’s a f*** you face. Sometimes I’ll spray the whole look with water and then have Tatiana scrunch up her eyes as hard as she can, which gives it an even more bizarre look.

Tatiana: We started pretty messed up with Sarah. Like, just makeup that has been worn for days and then piled on again.

Stephen: Maybe she slept on the train or in the station. It could not be adorable in any way. In the beginning, we went pretty far and tried not to use foundation. And M·A·C Spite Lipglass. This odd, grey, purple, deadly looking colour. It was so Sarah!  I just picked it up and put it on Tat and liked it and went for it. It kills the pink in the skin. This is not a girl who has time for gloss. I was making my notes and saw that it was called Spite and laughed to myself – it was perfect. 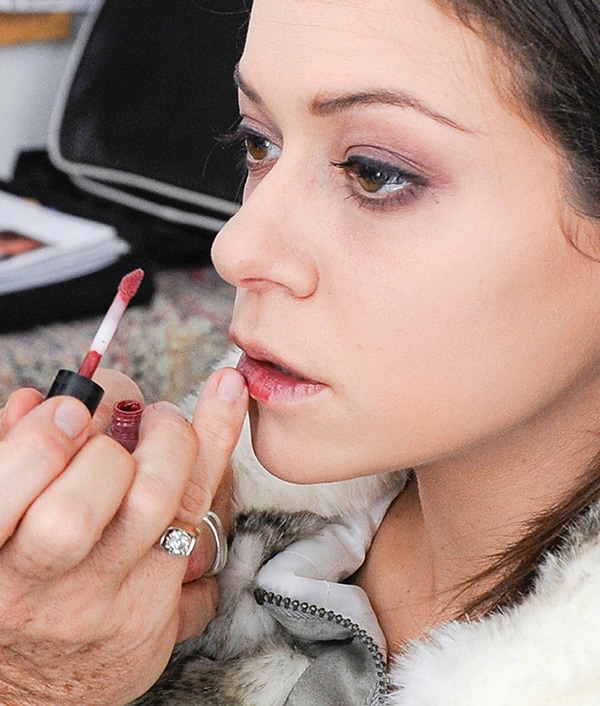 How do you factor a character’s psychology factor into their presentation?

Jordan: Stephen isn’t going to sit an actor in his chair and make them look beautiful for the sake of it. He’s always looking at makeup from a Stanislavski point of view. Where is the character at? What’s their emotional rhythm right now, and how does that affect how they put their face on today?

Stephen: We always keep events in mind. Felix is far too preoccupied this season to experiment much, so he has a quite pared down look right now. It makes sense in terms of his psychology. You have to pull back when you need to pull back. I call it “discretion is the better part of valour” makeup. That would be a great name to trademark. Otherwise, you’re just showing off. Characters have mourned, sometimes they just give up. Others are depressed but still put their face forward. Cosima, even though she’s very ill, still makes a valiant effort with her eyeliner and her brows. There’s been times when Helena technically should have come home with blood on her hands but Tatiana refused, saying she would never frighten a child. She’d find a way to clean up. So you find a way to work that into the story, which I love.

For whom have you created a special backstory?

Tatiana: We made one for Alison. Like, what is she hiding?

Stephen: Alison learned her makeup a good 10 years ago, if not more, and probably in some mall at a makeup counter that wasn't very good. Very happy in high school – hasn’t changed since! I think it gives her strength; it’s something she can cling to. Someone probably told her she looked pretty, so she froze her makeup to reflect that moment in her life.  She can control it and it gives her some measurement of happiness when things are chaotic.

Tatiana: Cosima was also cool story for me, because she was a student.

Stephen: We thought, wouldn’t it be cool to shave your eyebrows? Eyes are lined all the way around, very Kabuki, very matte, no shine. I had a student that came to school who looked like that everyday. I borrowed heavily from her.

Tatiana: That’s also the look that everyone has adapted for cosplay when they do looks from our show. The Cosima eye and glasses. I’d never seen it before on-screen. In life, yes, but not on-screen. Are there any characters that, through makeup, ended up different than expected?

Tatiana: Helena was supposed to be an entirely different character. Like Helena Bonham Carter in Fight Club. Her angel wings were going to be a tattoo. But Stephen said, what if she cut herself, and the scars are the wings? It fits more in the religious theme of who she is...and her self-hatred of being a copy.

Stephen: We went in a completely different direction than we were instructed to do. It was worth the gamble. I didn’t want to do another bad guy, in the Batman villain mold. Streaky black eyeliner, a wasted look. I wanted a more complex human being than that. A struggle between good and evil. She’s half Beelzebub, half Archangel. I kept going back and watching Joan of Arc because I was very inspired by that actress’s face. We see the overtones of religious ecstasy we imagined for Helena. I also looked a lot at Giotto’s paintings and frescos. I pulled the colours – umbers and burnt siennas – from that Renaissance period, plus took inspiration from the paler eyebrows and chalky appearance. I wouldn’t mind if someone referenced her face as a fresco that hadn’t dried yet! Painted on plaster….and maybe just as fragile. Ha!

Tatiana: When we were working on Helena, I closed my eyes while Stephen put a wig on me. I started crying.

Stephen: It was definitely a moment. 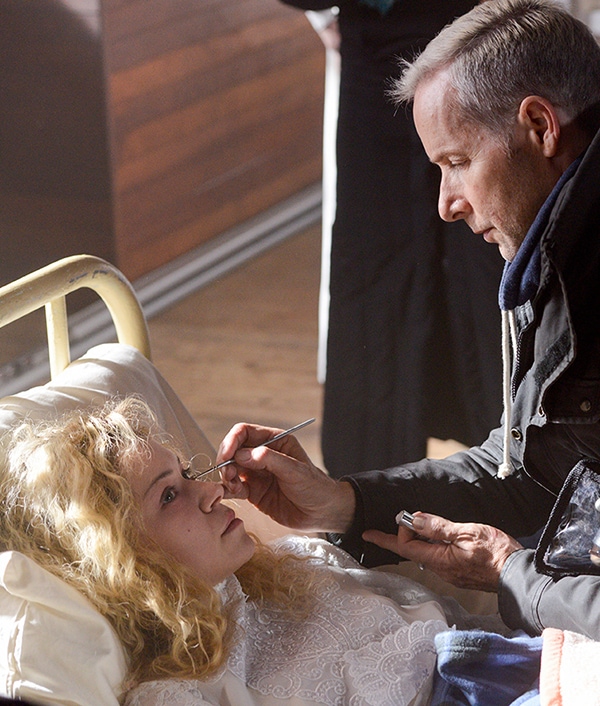 Aside from Tatiana’s clones, Felix is a standout character aesthetically. What is at play with his looks?

Stephen: He has very few limits, which opens up the world to me. The network at first didn't really want to him to wear makeup, and I had to say, “I don’t think this man limits himself in terms of gender or expression or sexuality at all.” We work that into the story as often as possible.

Jordan: From a character point of view, it wasn’t indulgent in any way. Of course Felix would treat his body and face as a canvas.

Stephen: He even let me do the “Makeup Counter Boy” eyebrows on him – you know the look.

Jordan: I used to work at a clothing retailer in college. There was this guy that worked at a M·A·C counter and he had shaved off his eyebrows entirely and had penciled them on. He had this amazing genderqueer look. I was entranced. I was so preppy. Just the way that he moved – he had this slick way of moving, almost like ballet. I was also fascinated by the theatrics of his face. Every flaw was gone. So when Stephen mentioned the makeup counter boy brows, I was onboard immediately! Tatiana embodying so much of the cast must create quite an impact on set. What does that feel like?

Jordan: When Tat plays Sarah, even off-set, that character feels very emotionally nearby. The heartbeat is right there.

Stephen: She has tremendous heart and empathy. She goes absolutely from the inside out. We’re on the same page that way. She wants to find the humanity first.

Tatiana: It’s a joy to play all those characters. For me, it’s just about finding different rhythms. And, yes, so much about the external does help me. I feel her – I know who that is. She defends herself with this sort of look, or she expresses herself like this. Sarah, to me, is hiding a deep well of vulnerability. I love it. It’s so much fun.

Can you give us any hints about the new season’s vibe?

Jordan: The emotional rhythm is panic. The whole season is about the man behind the curtain: P.T. Westmoreland. It’s a portrait of crisis, which is when characters are at their most interesting.

Tatiana: A clone playing another clone.